We stayed at Picacho Peak State Park on 4/30-5/2. It has great facilities and good desert hiking. It's too hot for this time of year, but we're glad we had a chance to experience it. The bathrooms and showers are nice and clean. There is not much shade as you can see. Each site has a shade structure, picnic table and fire ring. They have two loops that have electric hookups (I don't remember if they have water hookups). They also have a dump station on-site.

It was fairly windy on the last night of our stay. So much so it almost felt like the PUP was going to roll over. The next day my wife still felt like she was rocking back and forth even though she was sitting still. Overall, it's a very nice park and it will be sad when they shut it down. 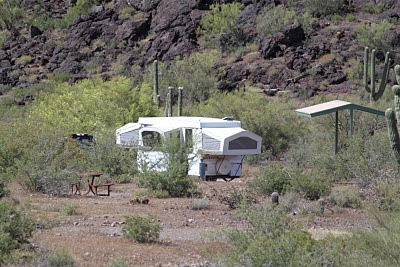 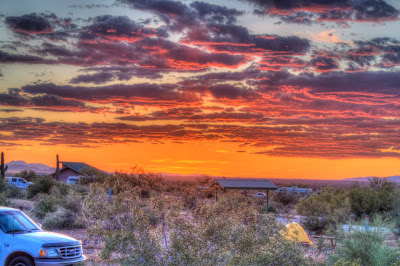 I like that sky shot, jbarz73. It almost looks like you added a lot of saturation or did an HDR composite.
H

Why are they shutting it down

Hot Cocoa said:
Why are they shutting it down

I have never stayed there but have been down near there hunting.

Did you get over to Rooster Cogburns and feed the Ostriches?

I heard a news report on Friday that with the passage of Prop 100 this past week that this and 4 other parks will remain open. You're right though, it's too dang hot to camp there now until September. Went to Roosevelt Lake two weeks ago and it was too hot there too!
J

The sunset shot is an HDR image using 0, +2 and -2. I'm surprised it turned out as good as it did since it was really windy and I was precariously perched on the top of my truck without a tripod. The full sized version can be found here: http://barzphotography.blogspot.com. You can see the movement of the bush from all the wind.

We didn't go to the Ostrich farm. Instead we went to the Catalina mountains northeast of Tucson to have a picnic and scope out some other campsites. That's were we found Rose Canyon campground, see http://www.popupportal.com/index.php?topic=36343.msg237380

As I understood it, some of the parks were staying open longer because some of the local communities stepped up to fund them. I didn't know that Prop 100 had anything to do with it.

Very nice, thank you for sharing!
A

They are still open

I write everything the voices in my head tell me.

We stayed there over the Holiday Break this past winter. With the fact that you can see both the freeway and the Union Pacific tracks from the campground, I was surprised by how quiet it actually was at night. The campground was well-maintained, and, despite being midweek (my work has a year-end shut down, so we skipped the weekend camping for this one), the spaces were filled up.

Sites have electric power, but due to the area's water supply, there are no water hook-ups. There is water available in the park at some scattered spigots, but the park asks that holding tanks not be filled at the park's spigots. We filled our tank before leaving home, and were careful with our water usage while there. The campground has modern bathrooms with sinks, showers, and flush toilets, and there is a dump-station for RVs in the park.

There is not a lot of retail in the general area, so it's best to bring your supplies with you. The park is about 40 miles northwest of Tucson, and about 30 miles southeast of Casa Grande, both of which have ample retail and are reached via I-10.