Some of you may remember that last October our 11 year old dachshund, Lilly, became abruptly ill and passed away within 24 hours.

Today, we learned that our 13 year old cat, Chloe, has a tumor in her nasal passages and will probably have to be euthanized sometime within the next month. This began with symptoms of a cold. Then she began losing weight at a rapid rate and her condition has worsened. She was to the vet again today and we were given the bad news.

Also, our other dachshund, Daphne, has severe diabetes. She get insulin shots twice a day but is nearly totally blind.

Pet ownership has it's rewards, but it can surely suck too.

So sorry to hear about your fur babies, they bring such joy to our lives for so many years, its hard to let them go.

Our thoughts and prayers are with you and your family.

Sending thoughts to you during a difficult time....my heart breaks for you and your family. We all know how much they bring into our lives and how much it hurts to let them go.

Our thoughts are with you, our furry family members bring such joy and love to us but only for too short a time.

Sorry for your loss, David.
A

Our thoughts and prayers are with you through these times
J

I feel so bad for you. I have 3 dogs and they are like kids-I have been there.

One Day at a Time

Sorry to hear the bad news Pets are great and they become members of the family and the lose it greatly felt. I no because just last month I had to put my cat down after 16 years my wife stated the cat defined our marriage as we got him 5 months after our wedding.
T

I'm sorry to hear this. It is so hard to deal with the loss of a pet. They become family so fast you can't remember a time when they weren't. Our cat just was diagnosed with diabetes two months ago. We are trying to do everything we can to control it so she has many years left with us. You are right, having a pet can bring you great joy, and yet with that we know all too soon, great sorrow.
K

David, sorry to hear about your furry friend. The good thing is you know in advance, and can spend even more QT and spoil the daylights out of her in the meantime.

I lost my cat of 15 years, in a matter of about 20 minutes from onset to the dreaded decision...every day should be appreciated.
W

I'm very sorry. I'm going thru the same myself. My dog was just put down. Sometimes there just aren't any words. The people on this site are amazing. God bless your "babies".
E

I'm so, so sorry for the loss of your pet. These little furry friends are such a joy to have and to love for as long as you have them and it is so very hard when you lose one. I just lost one of my precious babies
the 4th of May and I loved that little guy so much and miss him.

Our little furry friends are such a joy to us..
J

So sorry to hear about your loss. Our pets are like family members.
Our thoughts and prayers will be with you.
S

We're so sorry to hear about your loss of Lilly and then to find this news about Chloe. Our family cat is named Chloe too so we'll give her some extra hugs tonight and pray for you and your family.

After a month of lamenting the situation and hoping for some type of 'miracle', our Chloe was humanely euthanized by vet today. In the last couple of weeks, this tumor began taking over her left eye and deteriorating the flesh on her nose. She wheezed when she breathed and had frequent sneezing attacks.

We adopted Chloe from our local shelter 12 years ago, so I guess we really prolonged her life by more than a decade. It did not make things any easier when she lay on my lap, purring to me, as we waited for the vet to come in. 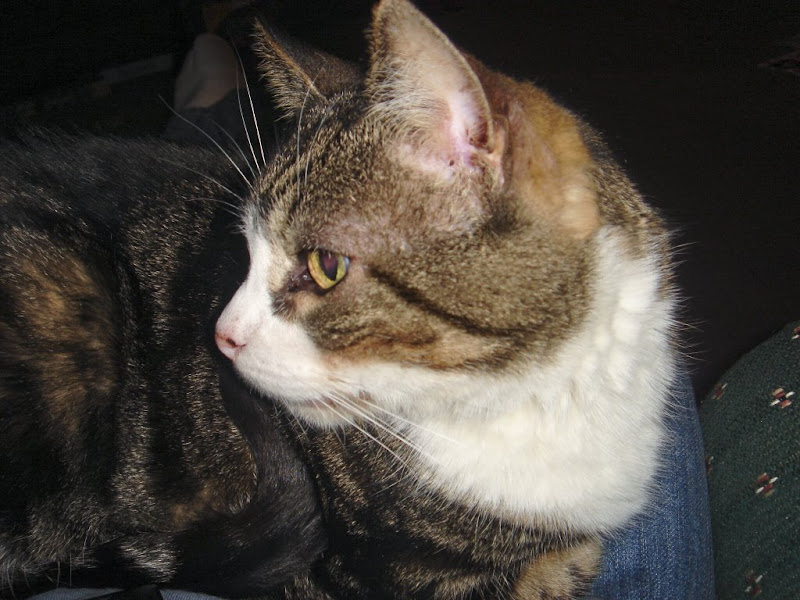 I am sorry about the loss of your dear Chloe David, you're in our thoughts.
A

I am so sorry.... my heart goes out to you and your family.
M